The second annual U.K. Championship Tournament hit WWE Network on Monday. For those of you who can’t watch right away though, here are some reactions from Editor-in-Chief Ryan Satin.

WWE using the network over the past few years to showcase independent talent in various tournaments has been a big hit in the eyes of many fans.

With the sheer amount of content being produced on a weekly basis from independent promotions all around the world, its become increasingly difficult to stay up-to-date with every single wrestler rising through the ranks. Tournaments like the Cruiserweight Classic and the Mae Young Classic, however, help showcase the wrestlers pushing through.

In the case of some, its led to a WWE contract. For others, it’s given newfound exposure and success on the independent scene after the tournament airs.

This is precisely why most fans have been excited to get acquainted with the next crop of talent rising through the ranks of the UK scene via the second annual WWE UKCT. 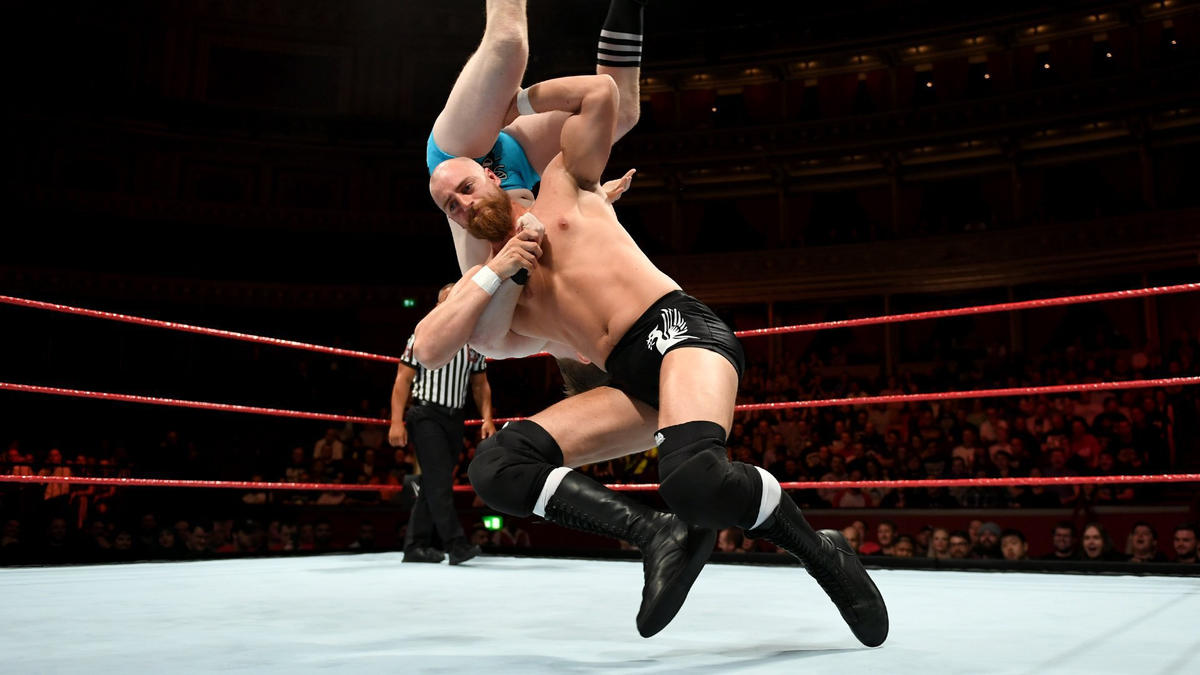 This match was a great way to kick off the tournament! Both Gibson and Gallagher represent what NXT UK will need to display if the division plans to stand apart from Raw, SmackDown and 205 Live in a compelling way — and they didn’t disappoint in showing that off.

Zack came into the tournament with tons of hype and lived up to all of it here. The intensity he displayed in the ring gave off serious star presence and made it clear why he’ll be one of the top guys on WWE’s upcoming UK show.

In addition to that, Gallagher was the perfect opponent to put in the ring against Gibson. Not only did he get a great babyface reaction to counter Gibson’s heel persona (which already had massive heat with the crowd), but some of the innovative offense he displayed helped set the stage for the rest of the tournament. The tope-atomico into a rear naked choke maneuver is a great example of that.

This match is worth seeking out. 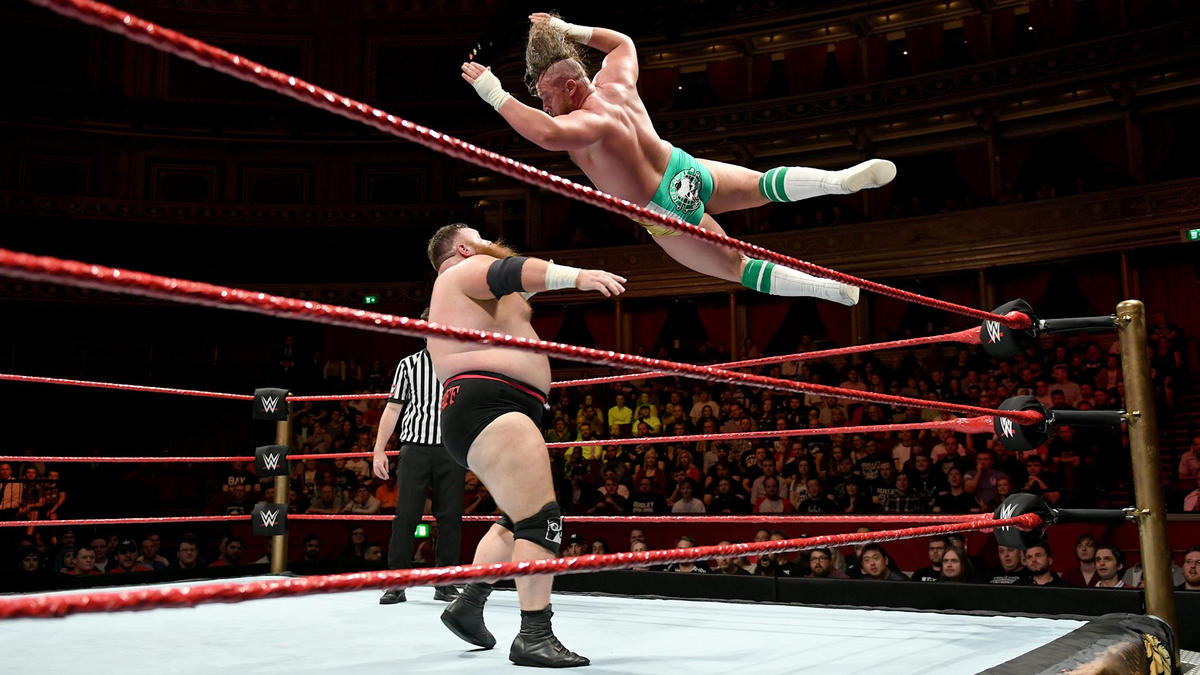 I thought it would be hard for Coffey and Mastiff to top the match that preceded it. I was wrong.

Joe and Dave kicked off the match running into each like Station in Bill and Ted’s Bogus Journey and it was truly a sight to see. With so many WWE shows airing every week, the content can sometimes start feeling too similar. This match, however, instantly showed that a slight tweak on classic wrestling spots can make things entertaining as hell. They literally spent the first few minutes just running into each other and it was awesome.

Prior to the tournament while listing NXT UK’s potential roster tiers, I tagged Coffey as a potential midcarder on the show. After watching this match though, and the rest of the tourney, I’ve now realized how off I was. Joe Coffey has main event written all over him. He’s got the size, the look and the skill to do big things in WWE/NXT UK.

This was proven in the match against Dave Mastiff when Joe wow’ed the crowd by hitting belly-to-belly and German suplexes on the over 300 pound wrestler.

If you like big dudes beating each other up, this match is for you. 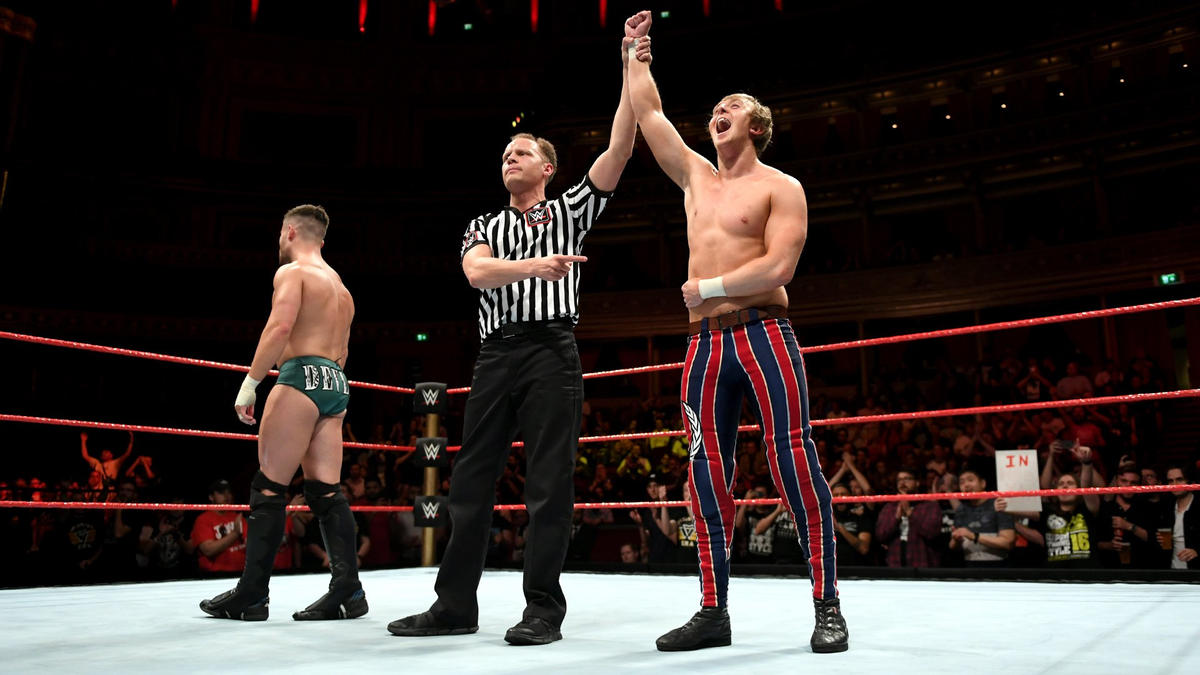 I just want to lead with mentioning how much I love Flash’s character. I’ve seen him wrestle in PWG, as well as in other promotions, and it’s great that he’s got an over-the-top gimmick that is fully formed … but not made out to be a joke.

Devlin, on the other hand, I’ve had trouble connecting with. Solid on all fronts — crisp as hell, effortless execution and great psychology — but his character doesn’t stand out in it’s own way.

With Jordan’s loss to Flash, I think the stage has been set for a solid heel run on the upcoming NXT UK show. If he wants to make a real name for himself there, however, Devlin needs some character work.

Solid match, but failed to top the two before it. 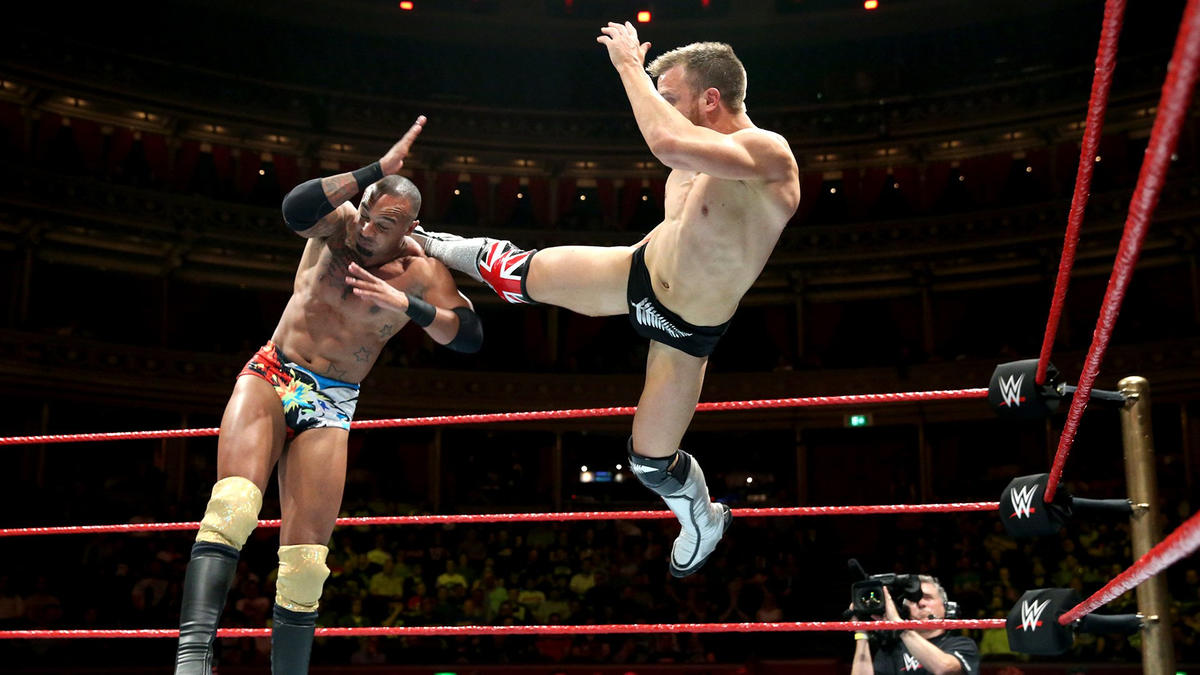 While Travis Banks is obviously one of top names in the tournament, I’m not sure putting him up against Ashton Smith was the best way to showcase his talents to a new audience off the bat.

In my opinion, Banks’ first round match against Ligero — available on WWE’s YouTube page — did a lot more to get Travis over and would’ve been a better choice for Royal Albert Hall.

Ashton is energetic, but his energy seems to have gotten the best of him … as there were a few sloppy looking spots that took the focus away from the match.

Not bad, but nothing too exciting either. Their clash of styles was a little too evident. 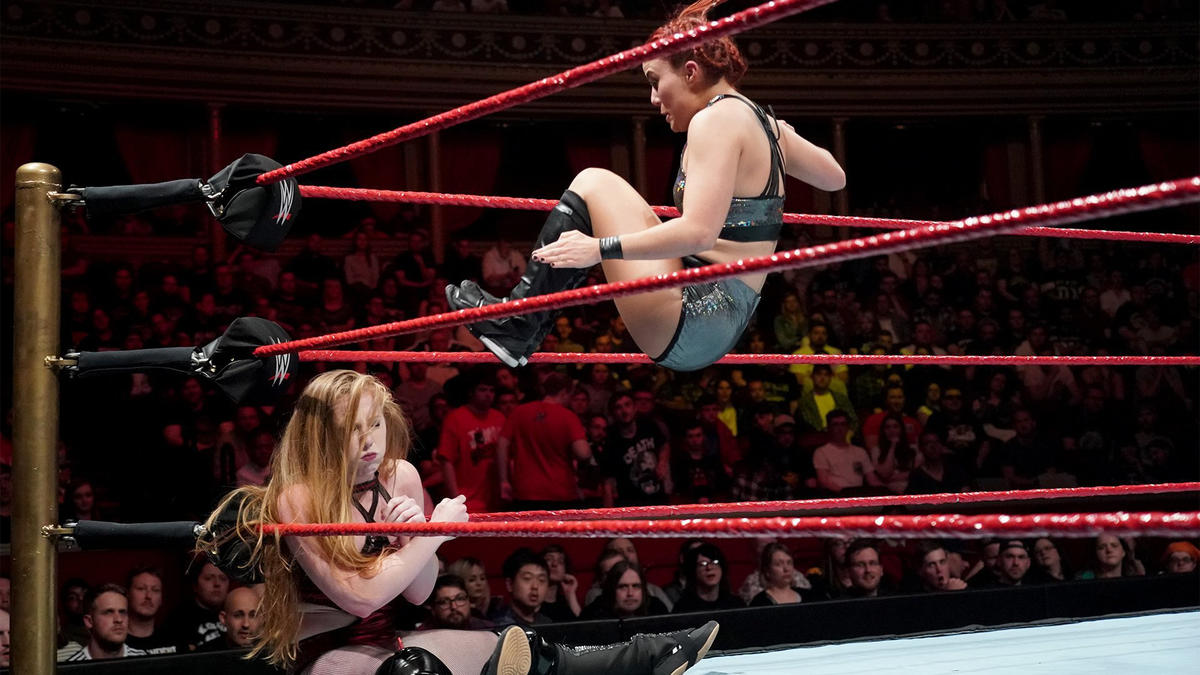 For those unaware … this match was initially a 4-way involving Jinny. Unfortunately, the match had to be re-taped after the PROGRESS Women’s Champion suffered an injury during the event.

Due to the last-minute change — and short time given for the re-taped match — the match was never able to kick into high gear to get the crowd invested.

Regardless, Toni Storm oozes star power and is always fun to watch in the ring.

Killer Kelly and Isla Dawn also impressed to help get the NXT UK Women’s division off to a good start. 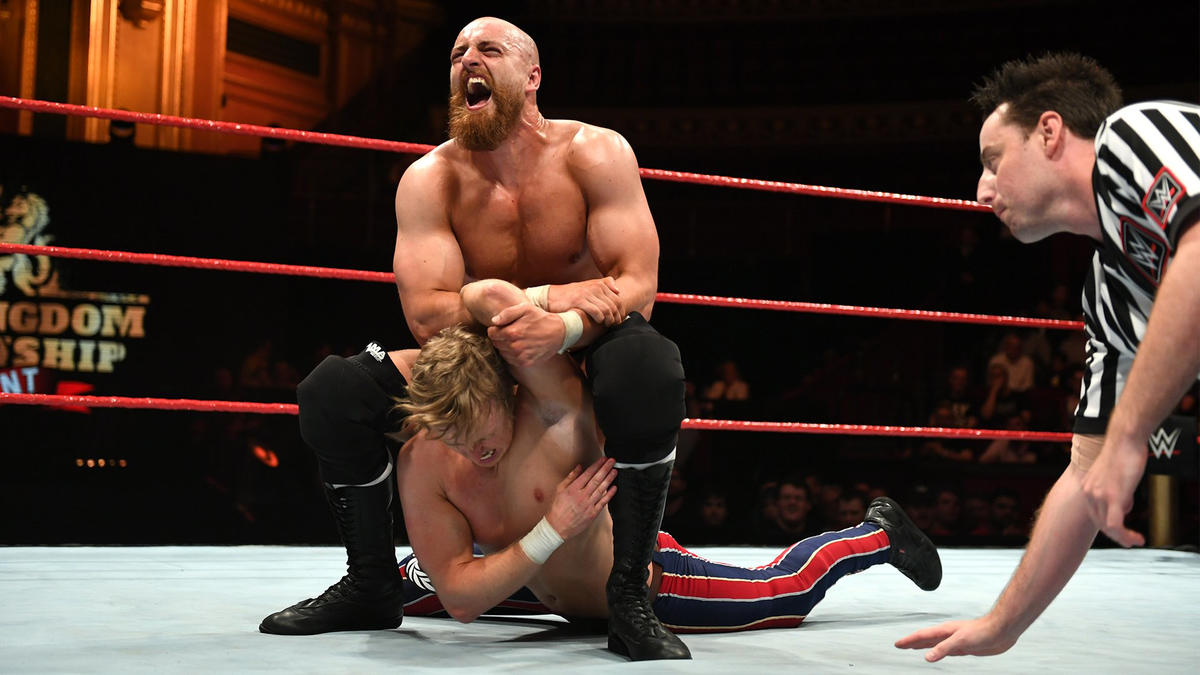 Another short match, but Zack Gibson was once again made to look like a beast. WWE is clearly trying to get him over as one of the top UK competitors and they’re doing a great job of that.

I would’ve liked to see Flash get some additional offense in — especially since last year’s event had such high-calibre matches and the live element only amplified that — but Gibson having more stamina going into the finals clearly played into the main event.

Nothing to rush home and watch, but it factored well into the overall story of the tournament and featured some cool spots to make the match worthwhile. 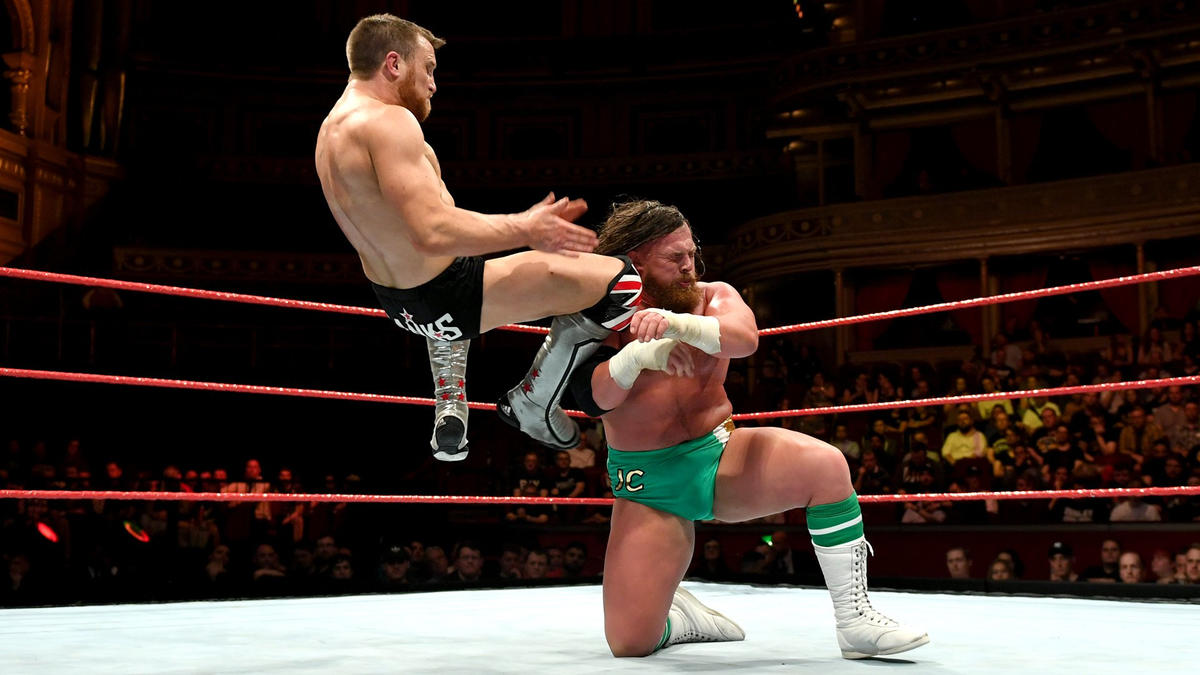 Night and day compared to Banks’ match against Ashton Smith.

The hype behind Travis was on full-display here and Coffey’s character was further defined as a ruthless competitor who will do anything to win. These two guys beat the hell out of each other to show they wanted to advance and it majorly helped the crowd get pumped up again.

Many people watching the show as it aired seemed disappointed over Coffey’s loss due to his standout performances, but the injury he was selling after the match against Mastiff made it more acceptable.

The post-match attack from Joe to weaken Travis Banks before the finals solidified Coffey as one of the top heels on the show — similar to Pete Dunne last year — and I’m excited to see the follow-up once NXT UK’s tapings begin next month in Cambridge. 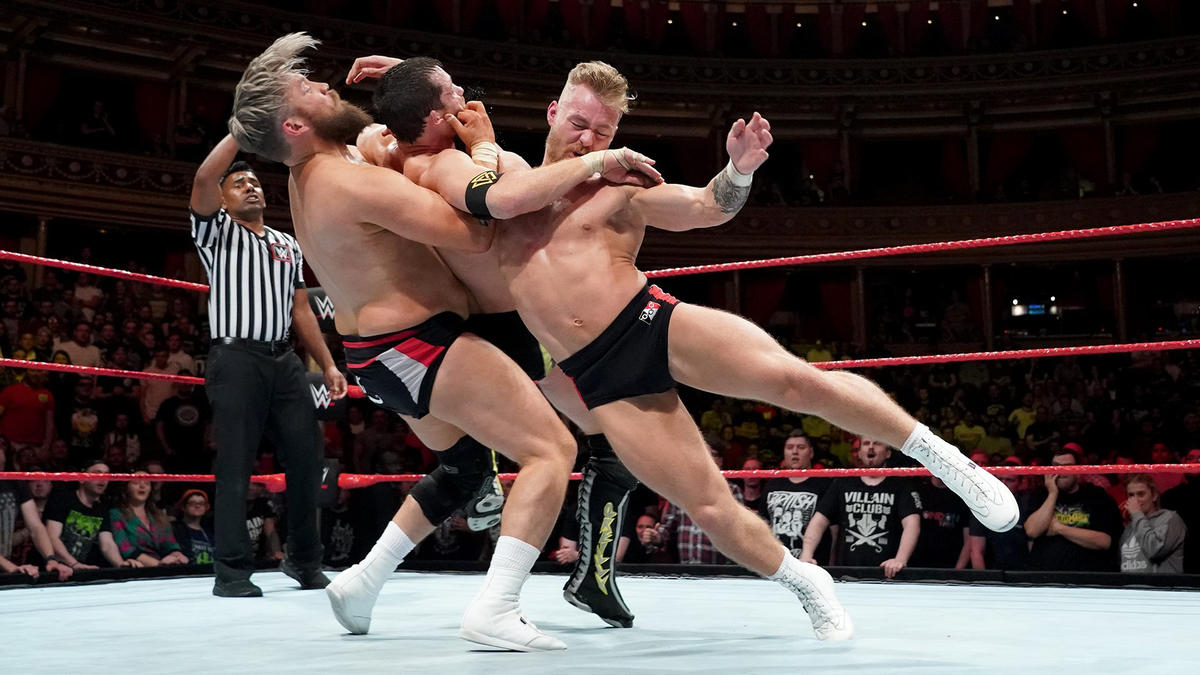 Pete Dunne, Tyler Bate and Trent Seven have carried the WWE UK banner with pride these last 12 months. Uncertainty over whether an actual show would ever come to fruition didn’t deter them. Instead the three wrestlers continued to grind on the UK independent scene, deliver awesome matches when given the opportunity and wisely bulk up to prepare for the future.

Now the show has been announced and British Strong Style seem to be positioned as the top babyfaces — at least if WWE is smart based on the massive reactions the group received — and they’ve got a plethora of heel adversaries to face-off against as NXT UK finds its footing in the coming months.

The match against Undisputed Era is proof that BSS has what it takes to build the division around.

Plus … it was also nice to see Pete, Tyler and Trent finally on the same page in WWE for once. 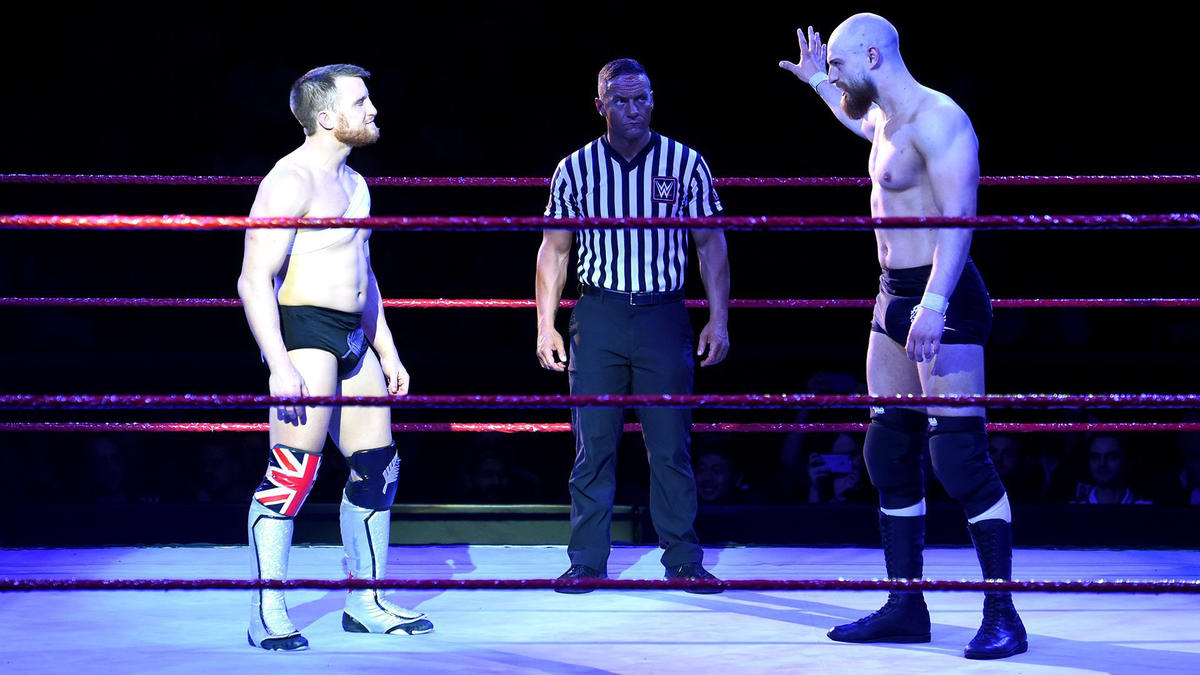 The great matches featured in the first UK Championship Tournament last year gave a big fight-feel to the final match between Pete Dunne and Tyler Bate. For some reason, unfortunately, this match didn’t have the same vibe going into it — at least for me as a viewer.

Yes, Travis Banks catching a beat down from Joe Coffey not long before the match added extra intrigue. And yes, Zack Gibson looked like a million bucks throughout the tournament. But the outcome almost felt too obvious.

The duo gave 150 percent and nothing was bad by any means, but it seemed to be missing something.

That being said, the roles Banks and Gibson will play on the upcoming NXT UK show were well defined throughout the tournament and both have earned their top spots on the roster.

Agree with my WWE U.K. Championship Tournament reactions? Think they suck? Sound off below.