Shotzi Blackheart wants a match against Io Shirai at NXT TakeOver … and if she earns that opportunity this week, the WWE Superstar plans to kick things up a notch in their next bout.

Blackheart, one of the competitors in tomorrow night’s battle royal to determine who will challenge Shirai next for the NXT Women’s title, spoke with Pro Wrestling Sheet about the opportunity ahead and how far she’d take things at TakeOver in rematch against the champ.

“I had such a fun match with Io. I would just love to get in there and do it all over again, but this time with more on the line,” she said during a phone interview this week. “Especially with it being a TakeOver. That would be my first TakeOver singles match, so I would just get crazy and bring out that Evel Knievel, daredevil spirit.”

Shotzi’s aforementioned “daredevil spirit” is part of what has helped her stand out amongst peers over the past few months. That spirit was given a spotlight back in May when she was the subject of a vignette that saw her crushing cars with a tank and howling from atop the massive vehicle. The old-school, over-the-top vignette made her appear larger than life and was an incredibly effective way of explaining her character to the masses. The tank ride, which she still can’t believe WWE let her do, was something Blackheart says she’ll take with her long after she’s done in the ring.

Since then, Shotzi has been climbing the ranks of NXT (as well as running over Robert Stone with her mini-tank in the process). While she has yet to reach the top of the mountain in NXT, the 27-year-old who signed with WWE in October of 2019 has a lot of momentum behind her due to a number of impressive performances as of late.

One of which included a match back in June against Sasha Banks and Bayley, who were the WWE Women’s Tag champions. “I could not even believe it was happening while it was happening,” Shotzi says of the experience. “They’re just on a-whole-nother level. They’re just so chill. They don’t even think about it. They just go in there and they’re just like, ‘Yup! I do my thing.’ And I’m like, ‘Oh cool … I’m super nervous right now.’ I had to slap myself in the face a couple of times just to get in it.” 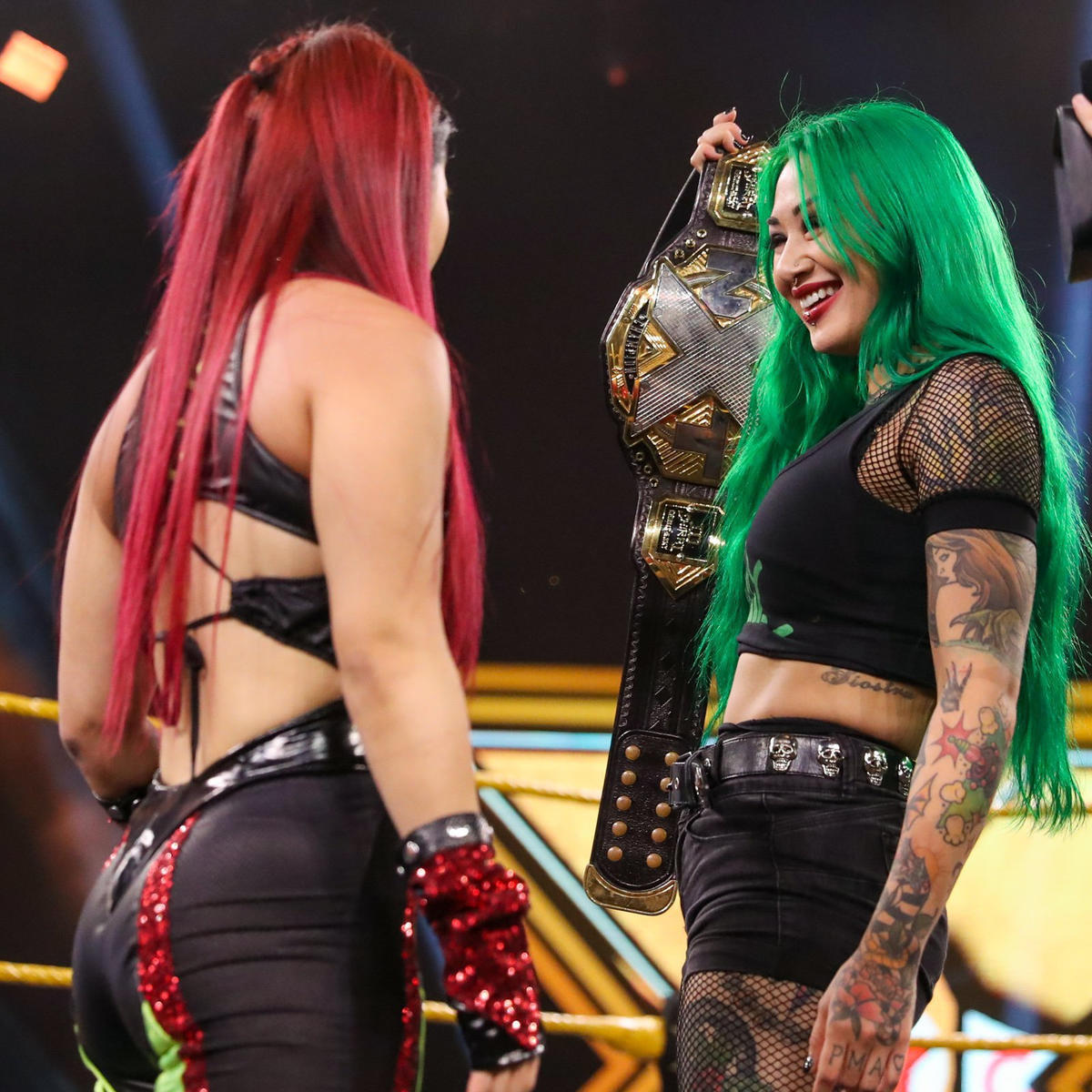 The match saw Superstars compete for a chance at Bayley’s SmackDown Women’s Championship. “Immediately I called my dad and was like, ‘Dad, I’m gonna be on FOX! Check it out. Don’t miss it,'” Shotzi said regarding her reaction to learning she’d be in the match. While Shotzi didn’t win, the NXT wrestler cherished being able to step in the ring with people she watched while coming up in the business and is hoping it leads to future singles matches against two wrestlers in particular – Naomi and Raw Women’s Champion Asuka.

The moment was also a little strange for the wrestler, since she was one of the performers WWE had been using as members of the crowd while shooting at the Performance Center. Luckily, that didn’t faze her. “It was a little weird, but it felt so right,” Blackheart explained. “I was so comfortable in there and it was tons of fun.”

Back in May, WWE started having NXT wrestlers and Performance Center trainees sit in the crowd to make up for the lack of an audience due to the pandemic. Some thought this might diminish the performers by making them appear as fans, but Blackheart saw it a different way.

“It makes such a difference having us there. So I was really hyped for it. I don’t know if you’ve seen the dancing GIFs that come up for me doing audience work, but I loved it. I loved supporting my coworkers, so I was all for it and I took advantage of it. And I had a good time during everyone’s entrances. Some people kind of view it as we’re looked at as fans and not wrestlers when we do this, but I’m like, ‘Uh uh. I’m having the time of my life.’ And I’m supporting my coworkers.”

“I know how I feel at NXT TV when I see the people that I train with out in the crowd giving me that energy. It just helps so much. So I can’t complain,” she added. “They do it for me. I don’t mind giving back.”

Shotzi also has love for the former NXT wrestlers who’ve debuted on Raw as part of RETRIBUTION.

In case you missed it … Dominik Dijakovic, Mia Yim, Mercedes Martinez and Dio Maddin were revealed as part of the renegade faction last night on Raw. Dijakovic and Maddin now go by the names T-Bar and MACE. The group also referenced their time at the Performance Center in an earlier promo. With RETRIBUTION having a large group of members at their disposal, possibly from the WWE PC, Shotzi seems to be slightly interested in joining them due to having similar interests.

“I think [their debut] was pretty bad ass. Dio looked like Predator. Everyone was wearing super cool masks. All of that appeals to me because I like the darker side of things and I’m for it,” she told us. “I like masks. I like all of the black. I like the crazy face paint that they’re doing. They’re wrecking stuff and just being destructive, I’m all for it. I’m like, where do I sign up?!”

Watch Shotzi Blackheart compete in a battle royal tomorrow night on NXT’s Take Off to TakeOver at 8pm ET on USA Network to determine the number one contender to the Women’s title.

The show is also set to include a Gauntlet Eliminator match between Kyle O’Reilly, Bronson Reed, KUSHIDA, Cameron Grimes and Timothy Thatcher to find out who will face Finn Balor for the NXT Championship at TakeOver on October 4.