NXT’s North American champion Roderick Strong is hours away from defending his title against Keith Lee. But before that … we chatted with “The Messiah of the Backbreaker” this week about his upcoming opponent, attacking Imperium at TakeOver: Blackpool II and much more!

The next few days will certainly be a challenge for 36-year-old Roderick Strong.

Tonight he’s set to do battle inside of the squared circle with one of the most powerful performers in NXT and someone determined to hold WWE gold for the first time in Keith Lee. Then, a few days later on Saturday night, he and the rest of Undisputed Era are scheduled to wrestle against the dominating team of Imperium from NXT UK at Worlds Collide on WWE Network.

And while that may seem like a tough task for some, Roddy is enthusiastic about being put to the test as he and his crew look to further establish their legacy in 2020.

That is no small order, however, as Strong’s past year was pretty remarkable. He ran roughshod over NXT with Undisputed Era, won the North American title on the debut episode of NXT on USA Network and was involved in a ton of awesome matches.

The NXT North American champion also scored a huge victory over AJ Styles and Shinsuke Nakamura at Survivor Series which demonstrated to the WWE Universe something the veteran wrestler has been determined to prove for years – that despite being an underdog in the eyes of some fans, Roderick Strong is undeniable.

Now, the NXT Superstar looks back at some of his recent accomplishments, as well as what lies ahead for his career in our exclusive one-on-one interview.

PRO WRESTLING SHEET: Keith Lee has been on a little bit of a roll as of late, what are your thoughts going into your upcoming title defense against him on Wednesday?

RODERICK STRONG: I think you’re right, Keith has been on a roll. I think Keith is red hot right now. Keith is a special athlete, and he’s a hulk of a human. I realized that [last] Wednesday when he was coming after me. I’m like, ‘Oh my God, this guy’s like The Incredible Hulk!’ This is obviously a thing that he deserves and I think Wednesday we’re going to find out if those lights are just a little too bright for Big Keith.

PWS: Since you brought up that moment last week when Keith was hulking out, what was that like to see in person when he pounced that security guard into the bushes and tossed the other guy into a car?

STRONG: It was surreal! That’s why I ran! I was like, “That guy is a little bit bigger than me, I don’t know how far I would fly.” But, ya know, Keith is an amazing specimen. That’s what makes, to me, tonight’s match so interesting.

Obviously we’ve wrestled before, but the stakes haven’t been any higher than this and, for me, this is a big matchup. My first time defending the North American Championship in 2020 and I’m just trying to start the year off right. I have my biggest test to date, but that’s the kind of stuff I’ve always prepared for. And I think, honestly, like I said, the pressure is gonna be a little too much for Keith.

I know he wants and he thinks he deserves to be a champion, but not when I’m around. Not when when the Undisputed Era is around. I think we are the backbone of NXT and us staying champions is important. Not only for us, but for NXT as a whole.

So, I think tonight is going to be extremely special.

PWS: On the topic of big matches you have coming up … you’ve got Worlds Collide in a few days against Imperium and they’re kind of like the backbone of NXT UK at this point, as they’re a huge part of it. You guys made your surprise appearance at NXT UK TakeOver: Blackpool II to kick off the program by attacking them. How did all of that come about?

STRONG: We just were like, ‘Let’s go to Blackpool and make an appearance.’ Then we just called some people and made it happen. That was a surreal experience though. That crowd is unbelievable and we felt we needed to fire the first shot. It was something we chatted about and it all ended up working out where we could do what we wanted to do. To just show those guys that at Worlds Collide it’s going to be great for them to be in the ring with Undisputed Era, for their stock, so we just wanted to give them a little taste.

That was a fun day though. Blackpool is a bit of a dark town, and a little grey cause it’s cold, but man … inside was on fire. It was an amazing TakeOver and an even better ending.

STRONG: They’re doing a great job over there. Marcel and Fabian have really come into their own as a team. It’s good to see their progression from when they first came to NXT to now. It’s pretty impressive. They’re young, they’re hungry, they have a lot of energy. Wolfe, I know him from his past and it’s nice to see him go out there and do what he loves to do. He’s a technical wrestler and he’s very, very good at it and he’s hard-hitting. And then you have WALTER. I know WALTER a little bit. We’ve wrestled in the past when we were on the indies, I think it was about 12-years ago or something around that, but just to see what’s he’s turned himself into. He’s a chopping machine and he’s tough as hell. They put together a fine four-man group. Not Undisputed Era-level group, but they’re impressive. PWS: Well hopefully there’s a moment where you and WALTER get into a chest-chopping session.

STRONG: You see, if he chops my buddies, he’s definitely gonna get it. I don’t know if he really wants it, but he’s gonna get it.

PWS: Going back a few months, how did it feel for you going into Survivor Series in November knowing you had such a big match ahead of you, one in which some people might have considered you the underdog going in, yet you still pulled out the win.

STRONG: It was amazing. I’m always gonna be considered the underdog. That’s just the way things are when it comes to me. Especially in high profile matches like that, you’ll always give the nod to the other guy. No matter who it is! And just to be able to leave there with a victory was big for me. 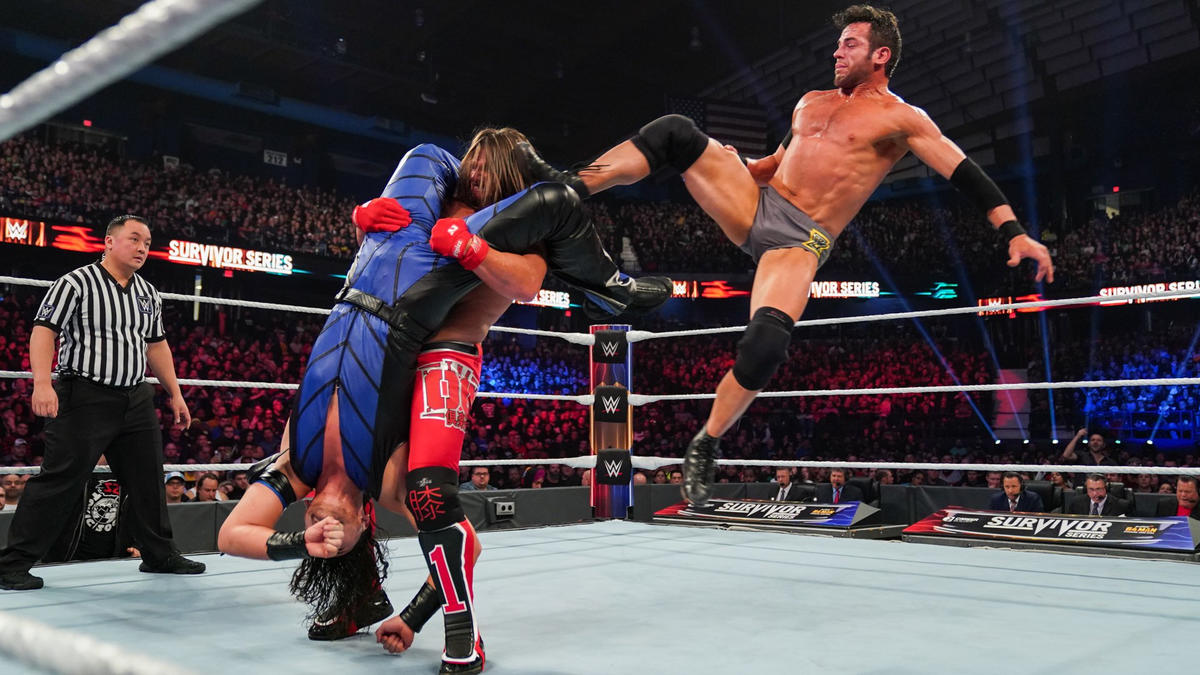 ‘Continue to doubt me,’ that’s what I always say. And it was super emotional because guys like that who I’ve known for so long, where I was kind of in the era of the same people on the indies, it always felt like I wanted to be grouped with those guys. Those were the guys I was working with on a constant basis back in the day and I always feel like people kinda confuse me when it comes to that. They think that I was a little bit later. I always want to prove, ‘Hey, I’m as good as those guys too! Don’t forget about me.’ So it was nice to be in there with guys that I have so much respect for, personally and professionally. I just want to freaking kill it and give the best match possible, and we had the opportunity to do that. I look forward to the days where I can have a singles match with both of them and we can tear it up. We can show the world just how good we are, again, as just one-on-one opponents.

PWS: Talking about being on the same level as some of the people in WWE and wanting to prove yourself, do you want to be in the Royal Rumble on Sunday? You’re gonna be in town.

STRONG: I’d be open for anything, but personally, if there’s anything I want to do, I want to do it with Bobby, Kyle and Adam. So if we do anything, I want us to do it together. So I don’t know.

PWS: You guys could all team up together and eliminate Brock.

STRONG: Yeahhh … or we just going around beating everyone up all day.

PWS: And lastly, you’re coming up on being part of Undisputed Era for almost two years now. How has being part of this faction helped you grow as a performer?

STRONG: Leaps and bounds. Just the comfort of it all. Because of the history of us knowing each other so long, they know me. I know them. It’s not like we’re in this feeling out process of if we’re going to get along. ‘Are things gonna work? Blah, blah, blah.’ They know me for me. They’ve seen the good, bad and the ugly. Everything. So it just allows me in any situation with those guys, and I feel the same as for them, is to be as comfortable as possible and just be who they want to be. And that’s why we have such great interactions and everything is so organic between us. Because no one is putting a guard up. No one is trying to be something they’re not. There’s a full understanding and that’s what makes it special. I can’t even think about my time here not being with those guys.

It’s kinda like when I met my wife. I couldn’t even imagine my life without her. It’s the same with those guys. They’ve just made this experience that much better and every time we do something it’s very special and is dear to my heart. Because I love those guys to death and I’m just excited to see what the future brings for us. We’re really just getting started. We’re finding our groove in certain things and our creative process is growing, so we’re becoming more creative as a group. This next year is going to be freaking amazing.