The Cruiserweight Championship has a long history in wrestling, and NXT’s newest Superstar to hold the title Jordan Devlin says his goal is to make the belt mean as much as it did in the ’90s when WCW was competing with WWE.

Devlin wasn’t surprised it happened though and doesn’t think he was the underdog going in.

As NXT UK continues to invade stateside, the 29-year-old wrestler from Bray tells us he’s on a mission to keep showing the world why he’s a major player. And while this may have started with winning the Cruiserweight title, that was merely the beginning. Devlin’s plans for the rest of the year include turning the division he now sits atop into the most-exciting part of WWE programming much like WCW did with it back in the day with guys like Rey Mysterio, Kidman, Eddie Guerrero and Psychosis … as well as becoming the top guy in NXT UK.

Read our one-on-one interview with Jordan Devlin for more on his plans to change the division and possibly entice Rey Mysterio into having one last Cruiserweight title match at WrestleMania.

Pro Wrestling Sheet: How did it feel winning the NXT Cruiserweight Championship?

Jordan Devlin: It was amazing, man. It was like the best moment of my career. I nearly jumped out of my skin, as you saw, when I heard the 3 count. It was just what felt like the culmination of 18 years of hard work and I was absolutely buzzing.

PWS: Did you feel like the underdog going in since you’re part of the NXT UK roster and people weren’t expecting you to win the Cruiserweight Championship?

JD: Naw, man. I’m “The Irish Ace.” I’ve been telling people and running my mouth for the last few years that I am everything I say I am, so I can’t be going in there with people thinking of me as the underdog. 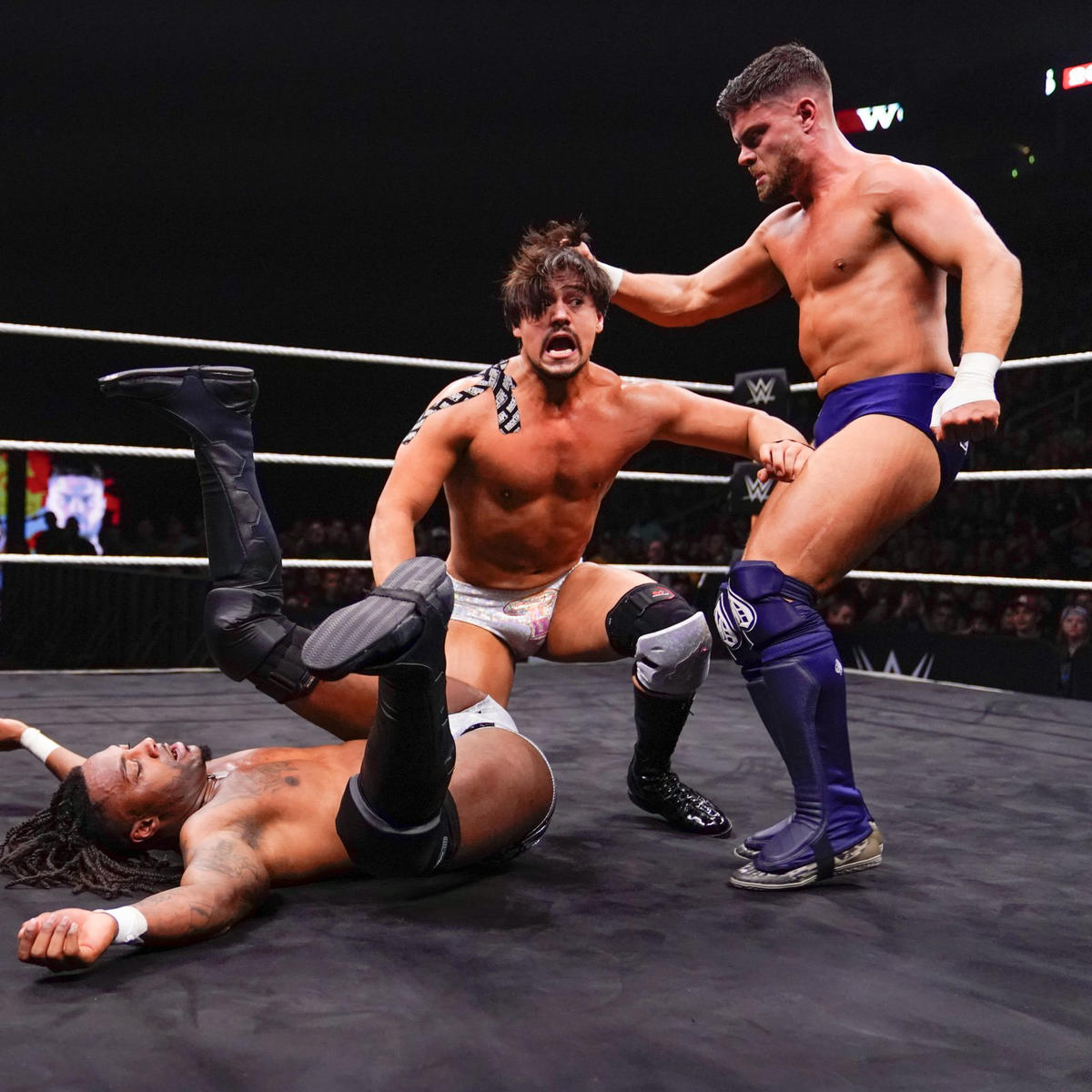 PWS: What did you think of the Cruiserweight title’s new look?

JD: Really big fan of it. I’m just sad that they had to give it to Angel to hold onto for me for 45 minutes. I felt really bad for him taking it off him.

PWS: You were announced for this week’s episodes of NXT and 205 Live. Will you now be appearing on NXT UK, NXT and 205 Live pretty regularly, while also doing indie appearances in the UK when time permits?!

JD: You better believe it, man! I’m a thoroughbred. I’m a workhorse. I’ve always said it. I’m entering championship rounds now, so I can’t just win my first championship in WWE and disappear. It’s time to show up on every brand and face every challenger.

PWS: The fact that you’re still doing indie appearances is pretty wild considering you’re going to be on 3 brands now, do you think you’ll still have time to be able to do that?

JD: I hope so. I really enjoy being able to do indie appearances over in the UK. I’m just back from PROGRESS this morning. I was there last night and then I was in Fight Club: Pro in Birmingham on Friday. So I’m still very much keeping busy seeing how many matches I can get down this year. Gonna try to break maybe 150 I’d say.

PWS: With all of that going on, how do you find time to unwind and relax a little? Because that’s a lot of work. Do you even have time to relax at all?

JD: No, I barely have time to breathe at the moment. I’m getting on my fifth flight in 5 days tomorrow to come over to the states for 9 days. I’ve been home in my own bed 6 times since January 8 between splitting my time in the UK and the US.

It’s probably the busiest I’ve ever been, but probably the most fun I’ve been having in my career and most fulfilling time I’ve had in pro wrestling.

PWS: Are you looking forward to getting more consistent guidance from WWE’s team of backstage producers and talent now that you’ll be out here in the States a little more?

JD: Yeah. I’ve always said the more time I get in front of WWE cameras the quicker people will find out who I am and what I’m capable of.

But on the flip side of that, the more time I get backstage with guys like Shawn Michaels, Triple H and William Regal can only help push me into the next level. So I’m loving being on the road with NXT and loving being able to bring a title back to NXT UK.

PWS: How has working with all of those guys helped you elevate your game the past few years?

JD: It’s unreal, man. To be honest with you. Triple H and Shawn Michaels were my favorites growing up. To be able to even interact with them has been incredible, let alone have both say that they think I have a big future in WWE.

Being able to benefit from the Performance Center in the UK has been one of the things that’s helped elevate me from a decent pro wrestler into being “The Irish Ace.”

PWS: It’s probably nice to have the production team there at your disposal as well. I really enjoyed the backstage videos you were doing on NXT UK where you were watching other Superstars on a monitor and talking crap on them.

JD: Yeah, that was a lot of fun. We had a good laugh filming them.

The delivery in which he called Tyler Bate the shortest member of the roster and shortest-reigning UK Champion of all-time, then Trent his elderly father, was hilarious. pic.twitter.com/m0nK1TBTwv

PWS: In general, when I watch NXT UK, I feel like some of the backstage videos and production elements utilized there aren’t talked about enough by fans.

JD: We got a good crew over in NXT UK. They’re encouraging and they’ll let you say what you want and pitch all these ideas. They only really have to rein us in whenever our ideas get too outlandish. But, for the most part, they’re really supportive and they’re up for thinking outside the box.

PWS: There’s now been a long list of competitors to hold the Cruiserweight Championship since it was brought back, with all of them leaving their own mark on the division. What do you hope to bring to the division as champion?

JD: I just want to make the Cruiserweight division mean as much as it did back when WCW was competing with WWE. When it was really groundbreaking, revolutionary wrestling.

I want to have the most exciting matches on any brand, let alone NXT or NXT UK or 205 Live. I want this to be a company-wide thing, that if you see the Cruiserweight title being defended you know you’re going to get a high-level, exciting pro wrestling match.

PWS: Are you hoping to defend the title at WrestleMania 36? And if so, do you have anyone in mind that you’d maybe like to face-off against there? Whether it be someone you’ve never wrestled against or someone you have who can help you show that to the world.

JD: I’d love to, yeah. That would be dream come true stuff.

In terms of just dream opponents to defend the title against, if I’m going to be making a request, I may as well see if Rey Mysterio wants to have a crack. See if he wants to regain the Cruiserweight title one more time.

PWS: Well if you’re trying to harken back to the WCW days, that would certainly be the person to do it with.

JD: Right? I can learn from no one better than that.

PWS: Is there anyone else from NXT UK you’d like to see join the Cruiserweight division?

JD: Well I think, outside of WALTER, most of the NXT UK roster is on 205 Live already, right?

I’d like to have another crack at Tyler Bate. I really enjoyed our match in Blackpool. Results not withstanding. I still think that if we went one more time I’d probably be able to … especially having the title and being able to use that momentum, to get one over on him.

PWS: You talked earlier about being a fan of Triple H growing up, was it wild for you to have Triple H talking about how he had to go in the crowd to see that match?

A standing ovation from @TripleH, @RealKingRegal and @JohnnySaintWWE on the balcony, and for good reason.

PWS: I can only imagine. Lastly, what are your goals for 2020? What do you want to see happen in your career over the next few months.

JD: I still haven’t taken my eyes off the UK title. It’s not enough for me now that I have picked up the Cruiserweight title. That kinda happened all of a sudden. It was a very welcome surprise, but the goal for me is still to be the person that you can build a brand around for NXT UK.

I still want to get a crack at WALTER and be able to show people what I can do in the ring against him. I also just want to make the Cruiserweight division must-watch and I want to make NXT UK one of the most exciting brands in WWE.

Watch Jordan Devlin on this week’s episode of NXT Wednesday at 8pm ET on USA Network, as well as on Friday night’s edition of 205 Live streaming on WWE Network.