NXT this week will feature Charlotte Flair in an NXT Women’s Championship match against Io Shirai – but before that, we took part in a Q&A sesh with “The Queen.”

Flair’s scheduled bout with Io Shirai on Wednesday will not only be her first time defending the belt since beating Rhea Ripley for the title at WrestleMania, but also her first NXT title defense since 2015. Unlike her previous run on the brand, however, Charlotte has returned as one of the most dominant competitors in all of wrestling while pulling double duty on two shows.

In case you need a reminder, here are some facts as proof: ten-time champion on Raw and SmackDown, two-time champion on NXT, 2020 Women’s Royal Rumble winner, defeated Trish Stratus in her final match at SummerSlam.

But while all of this may seem like it comes easy the daughter of Ric Flair, Charlotte was open with us in talking about the pressure she puts on herself each time she steps into the ring – whether it’s with Mia Yim last week on NXT or Liv Morgan on Raw.

Read our full conversation with Charlotte Flair below where the NXT champ additionally talks about her dad’s WWE retirement match influencing how she approaches crowdless shows, dealing with hate from a portion of fans, recent comments from Ronda Rousey and more!

Pro Wrestling Sheet: First and foremost, since you’ll be defending your NXT Women’s title against her this week on NXT, what are your thoughts on Io Shirai?

Charlotte Flair: Not necessarily storyline-wise, but on a personal note. Not that I’m comparing Io to Trish Stratus, but I have that same kind of feeling. When Trish came back out of retirement and wanted to have the match with me, I was just so nervous about am I gonna be as good as she thinks I am? Or as competitive as I am? She wants to come back and be in the ring with me, I hope I live up to that hyper expectation. And I’ve been told by a few people, and I’ve heard in interviews, that Io has said I’m her dream opponent.

I just go, “Oh man, I hope I’m every bit as good as she thinks I am” or she sees me in that light. I hope I bring that best Charlotte to the ring that day for her. So that’s how I feel on a personal note, but storyline-wise, I couldn’t pick a better number one contender, or first title match for the NXT title, with it being Io.

PWS: Back on that personal note, something you said there fascinated me. Because you’re someone who really is at the top of their game right now, but you’re also someone that people look at as one of the top competitors in all of wrestling. So it’s interesting to me to hear how much pressure you put on yourself to live up to that expectation before matches. Do you kinda always feel that way before matches? Or just the ones that are hyped up like this title match?

FLAIR: I guess you could kinda say I get a certain kind of nervous or certain feeling before every match. If you know me personally, I am a perfectionist to a flaw. But even with my match on Raw with Liv Morgan … we had a lot of time. And the ladies fight for time, right?

So I just go, “Whew, they trust us! Here we go! This is either gonna be really good or bad!”

There’s just certain things I feel before each one.

Like, ok, going into WrestleMania with Rhea. I was like, “Well this has to go well! This can’t go bad. This is her first WrestleMania!” And I know, under the circumstances, I know she probably dreamed of the 80,000 people in a stadium, but I just told her, “Listen, this is an opportunity without an audience to really show the world how good you are.” So I had to go in there with 115% confidence. Like, “Oh, nooo. I’m not nervous AT ALL! This is a piece of cake.” [sarcasm]

So yeah, that’s a little bit of how I feel. Every match is a little different.

PWS: One thing I’ve noticed from you in these crowdless shows is that you’ve become much more vocal during matches to make up for the lack of audience noise. Talk to me about your thought process a little there. Was that something you instinctually started doing? Or was it a directive?

Before WrestleMania, I legit thought out, “What am I gonna say during this?!” Because nothing is worse than dead time.

By no means am I comparing any of my matches to that, but I’m going why, when you think about that match, that’s the only thing people talk about. Right? So I go, how do I bring that to every match? So I remember when I dropped the title to Sasha for the first time. This was the first time I tried it to see if it really worked. I looked at her before I lost and I said, “you’re never gonna beat me.” And that’s continued to replay and replay and replay and replay in all the packages. And that’s what I remember from that match. So, going back to that, I tried to find little things. Then you forget about it and picking it up again now without an audience by coming back to that. I just hope that something sticks that I’m saying that’s remembered.

Cause Shawn and my dad … what do you remember?

PWS: That’s 100% what people remember! Obviously it was a classic match, but that’s definitely the thing you think about when you hear that match being mentioned.

FLAIR: Yeah! I mean, yes, classic. But that’s what you think of! You’re not like, “Oh man! That moonsault that he did when he landed on commentary.” No! No one’s talking about that! So I just have always tried to find those little moments to do that and really right now I think if there’s ever a time to find a moment to talk, it’s now! It’s silent!

PWS: Since you mentioned wrestling Sasha back in day. You last won the NXT Women’s title in 2014, lost it in 2015, then got drafted to the main roster. How do you feel you’ve changed as a performer since you left?

I literally showed up in 2012 and was like, “Here I am! I have no experience.” But I never stopped learning. That’s the one thing. If I could go back to when I debuted in 2015 – man, I wish I was the performer then that I am now – and redo so many storylines. I’d do it all over again. If I could redo me and Sasha, oh man. Or redo me and Paige. Have that match again with Nikki Bella. I know so much more now. 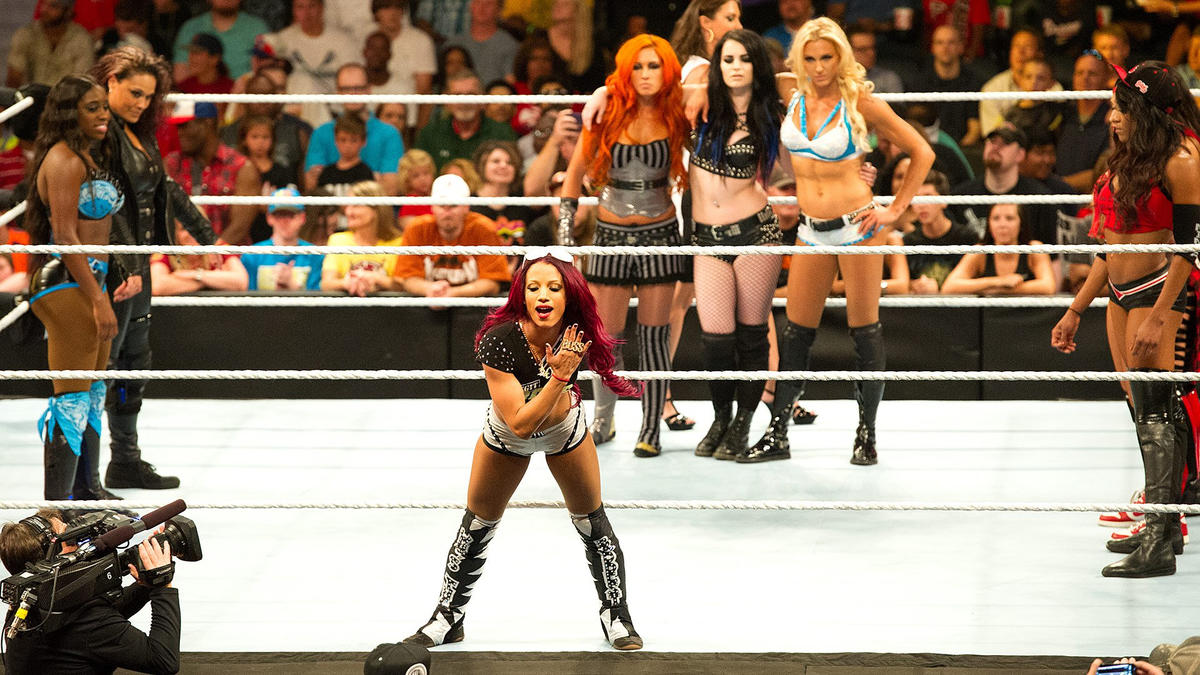 Then I was thinking … how do I hold my head in my entrance? How do I wrestle? How do I hit the ropes? How do I go left foot, right foot while woo’ing? I was just trying to take in so much to keep up with everyone that was in my class. Because they already had the wrestling experience, so they were trying to figure out their character. Whereas I had no wrestling experience. Yeah, I had a last name. But as you can see, I still struggle with do I woo or do I not woo?!?

Now it’s just … ok, I know how to wrestle. It’s just how do you stand out and how do you make yourself a star? I wish I thought about that in 2015.

PWS: I feel like you have a similar effect to that of John Cena on the audience, where some people just love to hate you no matter what. Did you ever get any advice from him on how to handle it? Because I’m always impressed by how you’re able to not engage and just continue to do your thing.

PWS: Well, from the outside looking in, you do look that calm and collected. I’m always impressed that you’re able to power through and not focus on negativity. So, from my perspective, you do a great job of being on that same level.

FLAIR: Thank you. I guess I just don’t engage because I’m giving them what they want if I do. Don’t give them what they want. You don’t get my attention. You don’t pay my bills. You don’t get to tell me how hard I work or don’t work. I’ve come to a point where no matter what I do … good, bad and different … working both brands … busting my butt … it doesn’t matter. People still say, “you are just Ric Flair’s daughter.”

So, I had to have many pep talks. Where I say, “Ok, no matter what you do … it does not matter.” And just deal with it. Know your own self worth. And I have such an amazing inner circle. I have a small group of friends. I can’t even go to my dad. My dad is like the most biased human being. He is, legit, my biggest fan. If he could wear one of my robes to the show and sit front row, I’m sure he would.

Now it’s like, Charlotte, just go be Charlotte. WHAT DOES THAT MEAN?!?

PWS: Moving topics slightly, I know that you’re one of the people in WWE who the company relies on to do lots of appearances when things are normal. So downtime at home is really not something you get a lot of. Now that you have it though, what are you doing to pass the time? I feel like everyone is picking up a hobby or watching things they never got around to watching while stuck at home. 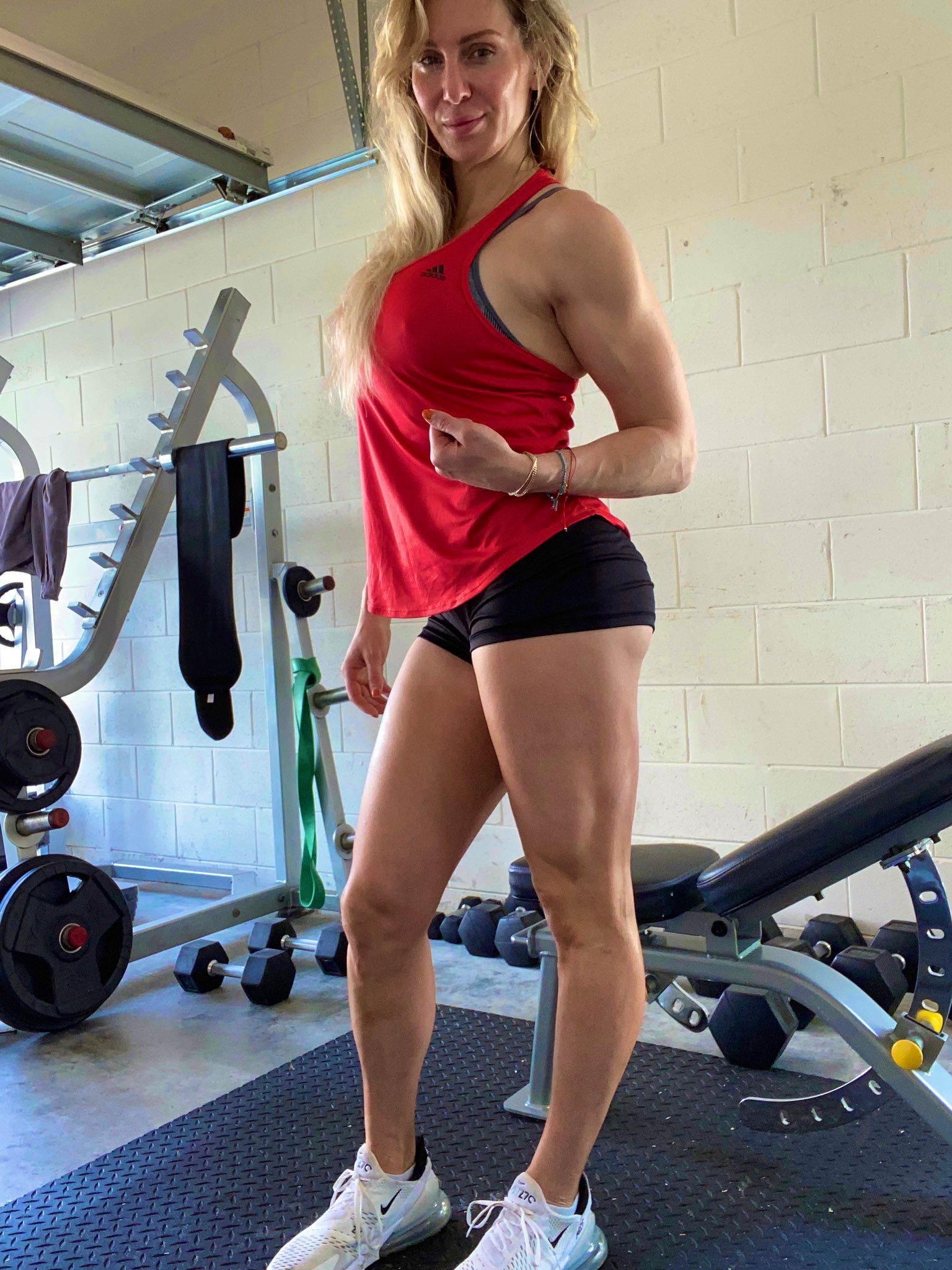 [Andrade] and I just built a gym in the garage, so that’s been a lot of fun. Just a lot of sleep and cooking. I’ve never known my way around a kitchen, so I just made lasagna and brownies. I’m gonna come out of quarantine with people saying, “Whew! Charlotte’s really put on a lot of muscle!”

But just enjoying the time with him and right now I’m at the beach with my dad and [Andrade]. It’s like a five-hour drive from our place. I’m here for three days, which I probably wouldn’t have done. But I will say it’s nice being in Orlando, especially having to work Raw and NXT. Because I can’t imagine NOT living in Orlando and having that. So it’s like a perfect time to be NXT Women’s Champion.

PWS: Lastly, Ronda Rousey got the wrestling world up in arms again recently after she referred to WWE as “fake fights for fun,” as well as a few other comments she made. You being one of her most prominent opponents while she was on the road, I’m just wondering … what did you think about what she said?

FLAIR: Does anyone remember that famous knee in the police car going into WrestleMania?

PWS: I don’t think anyone forgot that.

Be the first to comment on "Q&A With Charlotte Flair – Living Up to Expectations, Io Shirai and Dealing With Negativity"